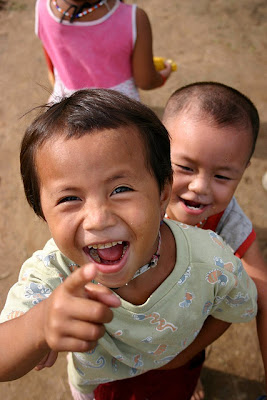 Smiling is an international language understood by people across all cultures. I smile most when I’m with my friends. I think that smiling is something valuable and it shouldn’t be given away cheaply. Smile only when the occasion arises. There are times when I tend to smile too much, so much that it may look forced. Maintain the value of your smile by smiling with a reason. =)

Smiling is contagious and much better than catching a cold or a yawn. We are walking-talking pools of reflective behavior and it’s hard to resist a bright contagious smile. All the more reason to spread the love and smile at a stranger.

That contagious smile from a stranger extends to our everyday interactions with people. Self-help and psychology books abound with the simple advice to smile in conversation (when appropriate) and in your surroundings. It gives the message that you are a receptive person and can improve relationships, with loved ones, friends, co-workers and neighbors.

While the sound of a smile might easily be called a laugh, our voices project a warmer tone when we speak with a smile. This is why smiling when on the phone is important and ensures a better conversation, whether with your mother-in-law or the sales person that called during dinner.

People who are successful in relationships, socially and in their careers have a smile that motivates and inspires others. No one likes a fake, so it is only those who project a genuine happiness and optimism in even their simple smiles. The act reinforces itself, and smiling can win friends and seal business deals, but also keep that smile on your face.

Being able to smile on command is part of a skill that gets actors Oscars, politicians elected, and workers promoted. The next time you walk into a room, realize that the first notice people take of you is what you wear on your face. Walking into class, the workplace, a meeting, an audition, even just the elevator, with a smile will make others feel comfortable in your presence.

Perhaps the most quoted philosophy on smiling comes from Dale Carnegie’s book How To Win Friends and Influence People, it costs nothing, but creates much. It enriches those who receive, without impoverishing those who give. It happens in a flash and the memory of it sometimes lasts forever.

The English politician and writer Joseph Addison once wrote, what sunshine is to flowers, smiles are to humanity. These are but trifles, to be sure; but, scattered along life’s pathway, the good they do is inconceivable.

While a smile may seem highly inappropriate when you’re on trial by jury, a phenomenon known as the Smile-Leniency Effect shows that judges give smilers lighter penalties. Several court studies revealed this and even when guilty as charged a smile soften the edges of even the hardest criminal.

Smiling is often an immediate reaction that accompanies embarrassment and rightly so. A smile or laugh can ease away the tension of an embarrassing moment and may be the brain’s defense against the influx of stress from blushing cheeks.

A study at the University of California by Dr. Dacher Keltner showed that women who showed an intense happiness in their smiles indicated a happier future. The women from the study with the brightest smiles were more likely to marry by the age of 27 and to keep a satisfying relationship.

Anthropologists, biologists and psychologists now agree that the smile is recognizable worldwide. While there are hundreds of different variations of smiles expressing the complexity of human emotion, the true, teeth showing, cheek lifting, eye squinting reaction to happiness is global.

Even in cultures that have long regarded smiling inappropriate in many social situations, have adapted to what is only natural. This has been most evident in the business environment of Japan, where entrepreneurs have adapted smiling to increase trade with the west.

One reason to smile is to celebrate your health, but smiling itself is a ticket to better health through neurotransmitters. Numerous medical and psychological studies have found that through the triggering of certain hormones, a smile promotes good overall health. This leads to lower heart rates, steady breathing and the ability to smile through stressful situations.

Smiling has been found to boost levels of the neurotransmitter, Serotonin. It is a vital part of regulating our moods, sleep, sexuality and appetite. There is an obvious biological connection to elements of happiness in the production of Serotonin. It goes both ways and producing a good mood, getting good sleep, good sex and good food will ensure the smiles and Serotonin keep pumping.

Endorphins are another neurotransmitter released from smiling and known as the body’s natural painkillers. Not surprisingly, endorphins are also released when laughing, exercise, frequent sex, eating chocolate, sunbathing, massages, meditation, dancing, singing and listening to music to just about anything that leaves a smile on your face.

Biologists have developed clever ways of understanding how all these neurotransmitters and biochemical activity interact. One acronym they use is SMILES, which means simplified molecular input line entry specification. It is a system of abbreviations to describe the structure of chemical molecules. Just remember, our bodies have miles of SMILES that help us keeping smiling.

One way to measure how good a smile makes us feel was revealed by researchers at The British Dental Health Foundation. After being shown pictures of smiling people, the brain and heart activity of participates was equal to being given the stimulation of 2,000 Chocolate bars. So the next time you think of giving someone Chocolate, a smile will suffice 2,000 times better.

One specific study that Christopher Peterson, Ph. D has had on going at the University of Michigan found the direct link between an optimistic smile and health. He says optimistic people create a different biological makeup that boosts their immune system. The right attitude in life keeps you open to healthy ideas and overall health means more smiles.

The physical act of smiling can use as little as 5 muscles or well over 16 and just like any muscle the more you use it, the stronger it is. Body builders shape their physique so their muscles are defined without even flexing, just like maintaining a healthy smile will define an expressive, happy face.

Genuine happiness creates frequent smiles and this is turn strengthens the ability to occasionally fake a smile to navigate difficult social situations. This is also linked to having an optimistic attitude in life and in difficult times, even a forced smile has roots in knowing that everything will be okay.

Practicing your smile might seem obsessive, even narcissistic, but remember those endorphins. Just like exercise releases endorphins, you can get a good boost by smiling 50 times right in row. Do that in mirror every morning and you’ll be sure to start the day laughing at your funny face.

When we keep are heads up, the term, ‘keep your chin up’ has real physiological benefits. Notice that when you stretch your neck backward and look up, a natural smile forms in the facial muscles. There are many simple movements in the practice of yoga that produce this effect and probably why everyone has a giant grin on their face after a yoga session.

As a naturally induced movement, the recognition of joy or pleasure involuntarily triggers smiles. It takes more muscles and effort to frown, where a smile relieves stress, a frown or perplexed expression can induce more stress. Prove it to yourself and notice that facial muscles relax in a smile, allowing blood to flow freely through vessels. The contortion of a frown exhausts the facial muscles, a clear warning from the brain that you need to relax.

Smiling wider than a grin enhances the pleasure derived from the act. On simple experiment used by some psychologists is to hold a pen horizontal between the teeth and grin as wide as possible, then repeat the grin with the pen placed horizontal between the lips in front of the teeth. Notice how much better a wide, unrestrained smile feels and remember that the next time you restrain the natural state of a smile into a grin; don’t hold back.

Smiling and laughing are intimately connected and both use muscles that never really tire. While you may have laughed so hard your face hurt, it’s guaranteed that when the laugh fest is over, there will still be a smile on your face. Overall, there is no downside to smiling and you can’t ever smile too much, just at the wrong time.

A true smile begins at the eyes, specifically the Orbicularis Oculi muscle, which involves another involuntary facial movement; blinking. While smiling and blinking are triggered automatically, the muscle can also be moved voluntary. Notice that if you check your smile in the mirror, or in another person, the most convincing area is around the eyes. Most fake smiles are like a grimace and just an exaggerated lifting of the mouth muscles. That can help in spotting the true emotions of others and enable you to return an eye-to-eye smile.

Smiling was essential to the evolution of the human species as a non-verbal que of co-operation. Since a smile is visible at up to 300 feet, the ancient Hunter-Gatherer tribes could signal to each that they were not a threat. This was a foundation to the peaceful co-existence for humans, so keep evolving and let everyone know your coming with a big smile.

Over a century ago the biologist Charles Darwin set out to study the similarities in the expression of human emotion across cultures. Years later solid evidence was found by Dr. Paul Ekman, who originally expected to disprove Darwin, but found that a smile is a smile, no matter what continent your on. This proved that a smile is a biological function of happiness, not a culturally learned emotion.

Dr. Ekman’s findings are further supported by the fact that babies born blind smile when happy, even having never seen a smile. The advancements in ultrasonic photography have also shown smiles on fetuses as the muscles develop. So smile, it’s your birth given right.

The biology of a smile was further researched using blind participants at the University of Haifa in Israel in 2006. After extensive studies they found that facial expressions had clear hereditary matches to family members, proving that a smile is your genes more than a learned trait.

While happiness comes at all ages, smiling into the golden years can actually promote longevity. In another study on optimism published in an issue of General Psychiatry, of those studied over the age of 65, optimists were 71 percent less likely to die from certain causes, than that of pessimists. A life full of smiles also exercises muscles in the face that help to prevent drooping, saggy skin in old age.

It is often believed that smiling is the result of a happy life, and just smiling for no reason does not create happiness. Though as many of these examples show, smiling reinforces happiness in the actual movement involved, triggering the brain’s pleasure points. Happiness and optimism might also have some genetic traces (between 50-70% of our attitude may be inherited says Dr. Kathleen Hall), but producing that inherited smile is ultimately up to you.

Hopefully you have a lifetime of smiles to remember in old age, but the great Roman Emperor Maximus said it best: I knew a man once who said, Death smiles at us all. All a man can do is smile back. That is truly the essence of optimism in the face of the inevitable.

5 thoughts on “Little Known Reasons And Benefits of Smiling”