A fingerprint is an impression of the friction ridges of all or any part of the finger. A friction ridge is a raised portion of the epidermis on the palm and fingers or sole and toe skin, consisting of one or more connected ridge units of friction ridge skin. These ridges are sometimes known as “dermal ridges” or “dermal papillae”. 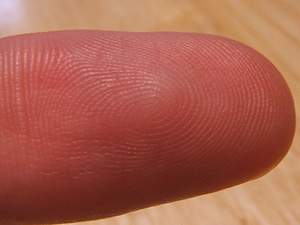 Collected at a crime scene, or on items of evidence from a crime, it can be used in forensic science to identify suspects, victims and other persons who touched a surface. It is one of the most reliable ways to single out a person and has been an important system in crime fighting since 1915. Below are a few points about the value of fingerprints.

One reply on “5 Facts About The Fingerprint”

very interseting information. at least we have settled the issue that fingerprints are more in use and more successful than dna. it seems that dna gets all the glory when in fact fingerprints are streaks ahead.